Laurenmary is a bright, colorful, and creative artist who brings tons of life and sunshine to the BBP site!  Located in Birmingham, Alabama, Lauren is an award-winning artist and interior designer.  Take a look at what she has to say:

BBP: Name an artist or person that inspires your art and why!
Lauren: My nieces and nephews are my greatest inspiration. There seems to be a new one to spoil almost every year (I have two in Japan and seven here in the States, with one on the way)! I’m always thinking of what would look cute hanging in their rooms.

BBP: Did you go to school for art or are you primarily self-taught?
Lauren: A healthy balance of both

BBP: When did you start designing/creating?  Was there a particular event that inspired you to pursue it further?
Lauren: I can’t remember a time when I wasn’t designing/creating. I suppose I really became enamored with design as a career when I lived in Europe as an adolescent. We traveled a lot, and with about 50 or so fine-art museum visits, a trip to the Bauhaus was all it took. I was never a skilled illustrator, so to see that simple, minimalist shapes and forms were considered “art” for the first time gave me goose bumps.

BBP: How has your style changed since you started?
Lauren: In the beginning, as most of us probably are, I was all over the place experimenting – not really having a style because I hadn’t honed in on it yet. I do know, however, that simplicity, minimalism and proportion have always been my cornerstones.

BBP: Where is the coolest place you’ve visited?
Lauren: Japan – I was there for two weeks traveling with my Pops. At the end of the trip, my brother was married on Aoshima Island at the Aoshima-jinja shrine. I really enjoyed experiencing life in that culture – especially since they are into simplicity, minimalism and finding beauty in function.

BBP: Do you have a particular spot or place where you create most of your art?
Lauren: I work and physically design in my studio out of our home, but I think I create mostly in my head and occasionally I will have creative sessions while I’m sleeping, then wake up and get it “on paper”.

BBP: Do you have any kids or pets?
Lauren: We have two cats that we rescued when they were about a week old, Spencer and Baker. We had to syringe feed them and keep them on a heating pad for a while as kittens. It was nowhere close to true parenting, but we feel like they’re our kids!

BBP: Growing up, were your parents into or involved in art?
Lauren: My Pops has crazy amazing handwriting, which certainly influenced my love for typography. He also builds furniture and structures, like meandering decks/stairs, trellises, gazebos, etc. My Mommella is a very talented illustrator and painter – when she lets you see her work, she’s a bit shy with her talent. She was a teacher before she retired and we always had arts and crafts in the summer.

BBP: What were your favorite hobbies as a kid?
Lauren: Anything art or design related. I remember once taking everything out of a board game box and setting it all up to look exactly like the photo on the cover – that was my idea of fun! My Christmas and Birthday presents were always geared toward design or architecture. I also was active in any kind of sports.

BBP: What’s your favorite story to tell about your childhood?
Lauren: Although both accidental, I broke my brother’s nose during a snowball fight; then that summer hacked him with a shovel creating a nice eyebrow scar – you could say I’m responsible for the handsome man he is today!

BBP: What did your room look like growing up?
Lauren: A disaster zone! As most creatives will tell you – an un-kept room is a sign of a well-kept mind.
Once I got into feng shui, though, it was a masterpiece of placement and chi!

BBP: Who is your favorite famous person (current or historical) and why?
Lauren: Frank Lloyd Wright. I believe that on some level, we all aspire to change the world, and this man did just that with his architecture, design and concepts. He was the first to literally open doors by creating the “open concept” way of living we see now in all contemporary home architecture. He truly changed how we live.

BBP: Who would you want with you if you were stranded on a deserted island?
Lauren: My husband, of course! He would keep things fun and we would probably be just fine staying stranded!

BBP: What is one thing that you’ve never tried, but would like to?
Lauren: Flying a plane

BBP: Do you prefer to swim in a pool, ocean, or lake?
Lauren: Since I’m a literal person, I would say pool for swimming, but I prefer to be at the lake or shore.

BBP: If you couldn’t be an artist, what would you do instead?
Lauren: Architecture, no question.

Feelin’ foxy? Check out this Nursery Roomboard inspired by Annisa Tiara Utami! The greens and yellows bring unexpected pops of color to the room, while the warm oranges and browns add comfort that will last long after your little one’s crib days. Both peaceful and cozy, you will love spending time with your family among these soft colors and rustic adornments!

Ryan Deighton is a UK based surface pattern designer, who has a passion for mid century and retro design that can be seen as a major inspiration towards his design identity. He loves to use collage craft, digital processes and illustration within his work that is then transformed into his signature graphic design style. He uses a series of bold colourful shapes and textures to recreate a nostalgic essence in a contemporary format. Ryan has created a bunch of fun and playful prints ideal for children’s bedrooms, bathrooms and playrooms that capture and inspire the imagination of children. Take a look at what he had to say to BoomBoom Prints:

BBP: If you had to describe your designs in 5 words or less, what would you say?
Colourful, Bright, Graphic and Playful

BBP: What is your favorite you use to create your artwork
I love to use collaged papers, acetate sheets and fine black pen to produce my initial ideas and illustrations. I then love to transform my ideas into digitally produced prints and patterns.

BBP: What would you tell a kid who said they wanted to be an artist?

Go for it! Be experimental and try out lots of different techniques. Remember to have lots of fun and get your friends involved.

BBP: What do you find inspires you most?

Patterns and prints from the 1950s mainly inspire me, as I love the colours and playful compositions. I also love mid century illustrations and packaging which provide me with lots of exciting ideas.

BBP: What do you like most about collaborating with Boom Boom Prints? What are your thoughts on the idea of customizable artwork?
I love how Boom Boom Prints provide a platform for me to showcase my work with the potential of my prints going to good homes.

BBP: Who is your favorite artist?
My favorite artist is Lucienne Day, a 1950s textile designer. Her experimental and abstract prints are very innovative of its time and are still seen as very contemporary today.

BBP: What is your favorite ice cream flavor?
Mint chocolate chip with extra toppings is a classic favorite however I do love a good lemon sorbet in the summer.

BBP: What was something that was near and dear to you as a child?
As a child I use to have a blue bear that went everywhere with me however as I grew up my younger sister took him under her wing so its good to know that my blue bear is still getting looked after.

5 Bold and Bright Nursery Trends of 2013

This year, designers are straying from the classic baby blues and pastel pinks and going bold!  With big patterns and bright colors, nurseries are now loud statements of whimsy and imagination.   We’ve come up with this list of daring design ideas that really make a nursery pop!

Adding both pattern and color, big stripes are sweeping their way across nursery walls everywhere.  Many designers recognize the simple technique is a fool-proof way to add personality to any space. Stripes are even an easy DIY option- with a little patience and a lot of tape, you can add this professional accent to your home. 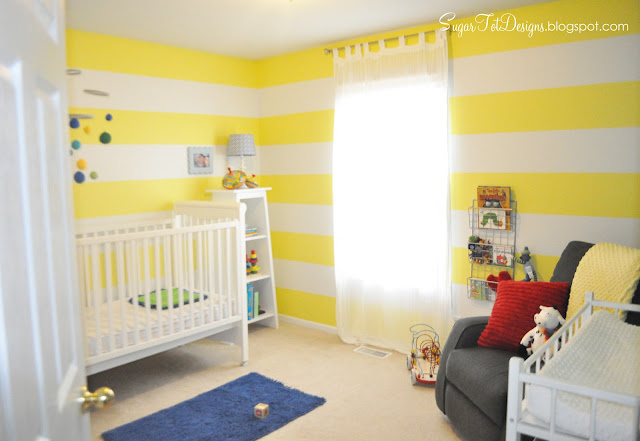 If you’re really brave, you can forget the walls and go for the ceiling, like in this little girl’s room: 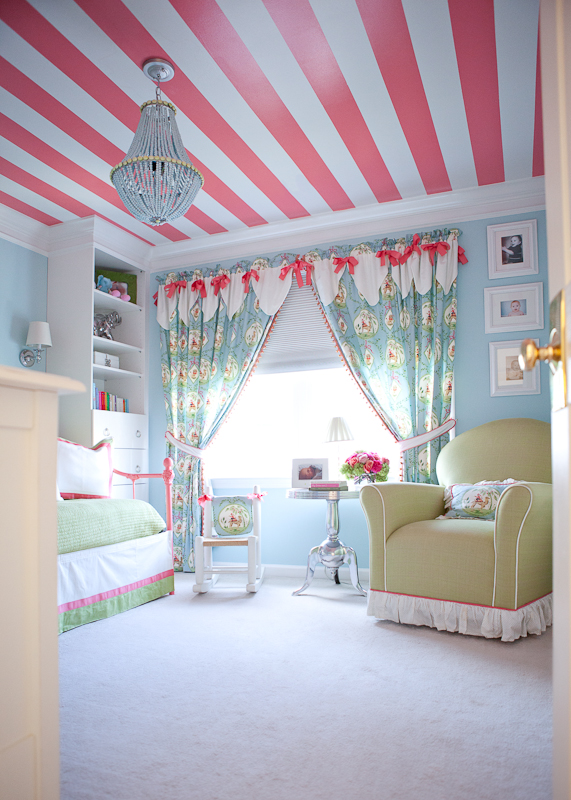 If not the walls, why not put color on the floor? Big or small, a colorful rug can add interest and intrigue to any nursery.  Find a thick, shag rug or one with fringe to add texture and depth to the room- and a little bit of hominess!  Plus, it doubles as a great play space as your baby begins to sit up and play on his own. And we don’t mean the ones you win at a carnival.  As one of the staple toys in a nursery, stuffed animals are now being directly incorporated into the design of a baby’s room.  From sheep to giraffes to teddy bears, oversized plush animals add a unique shape that contrast all the right angles of cribs, changers and dressers. Plus, they’re super cute! Rockers and gliders these days come in awesome colors and patterns, which can make a great focal point for a nursery.  Unlike cribs that come in an almost-universal size and shape (and usually only about 4 colors), rocking chairs vary drastically. Rocker or glider, Wooden or cushioned, upholstered or solid, your choice of chair can easily define or enhance a nursery theme. 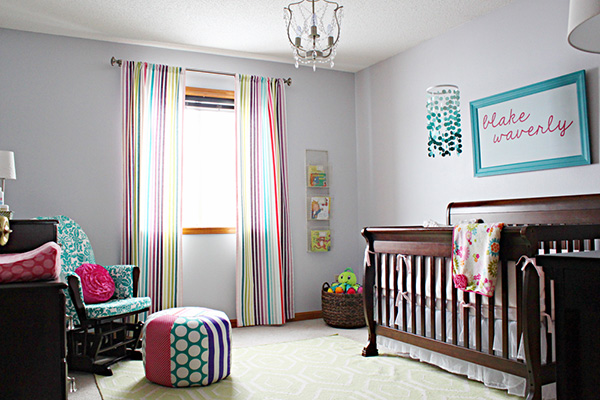 Mobiles are to nurseries like bows are to birthday presents- just a little bonus fun on top!  Luckily, they no longer have to be stuffed cartoon animals and can be a great way to show off your nurseries personality.  This year, many new moms are choosing to go with colorful paper origami mobiles and stylized, modern animal mobiles. 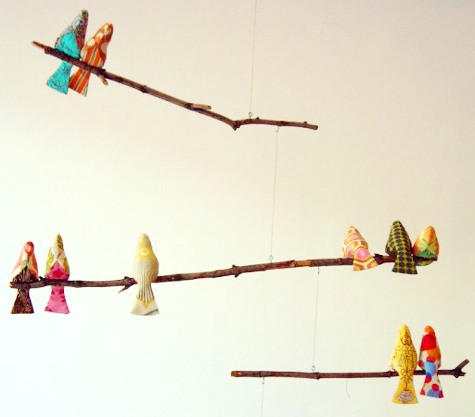 Every month, BoomBoom Prints hosts webinar designed to help our artists succeed. Take a look at the latest!